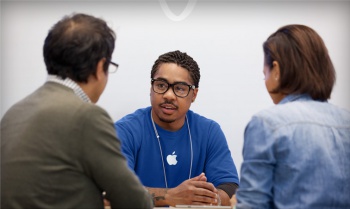 The hot new scam in Beijing, China involves monopolizing Apple's Genius Bars, forcing anyone with a legitimate need to visit one to pay exorbitant prices for the privilege.

If you own an Apple computer, an iPhone, or an iPad, you likely already know that if your gadget breaks, your best bet for solving the issue is to pay a visit to the nearest Genius Bar where, unless your gear is out of warranty (or you're a huge jerk), they generally just hand you a new version of whatever device you somehow busted. Here in the States it's a pretty simple process: You go online, set up an appointment, and show up at the allotted time. In my experience it never takes more than an hour to wrap things up, and when there's a major problem, Apple keeps its customers updated on every step of the process.

Unfortunately, Chinese Apple fans aren't so lucky. It seems that a group of enterprising, morally flexible scammers in Beijing have started to flood the local Genius Bars with appointment requests. Once they've locked down all of the possible appointment slots for any given Genius Bar, these spots are then sold piecemeal to needy Apple users for as much as 40 yuan. That roughly translates to about $6.50 USD, which doesn't seem like much to those who live outside of the People's Republic of China, but it's important to remember that the average monthly salary in Beijing is only about $762. In that light, $6.50 is a sizeable chunk of cash.

Apple has yet to act on this information, and all attempts to contact the company on this matter have proven fruitless. We didn't even get a boilerplate "no comment." So now the question becomes: Who will come down on these scammers first, Apple or the notoriously strict Chinese government? Apple owners are generally a wealthy lot, so I have to imagine that some of them have a bit of political clout. As my dear old mother used to say, "You never get between a politician and his ability to watch endless loops of kinky, niche pornography."