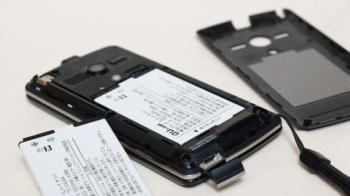 The new lithium-ion battery from Shin-Etsu Chemical Co. boasts over ten times the capacity of the current standard.

Smartphones are great! You can essentially have the entire wealth of human knowledge in the palm of you hands, no matter where in the world you are (as long as you have reception). Android and iOS have also proven to be quite suitable platforms for gaming on the go. The only problem is, even with the best battery on the market, you'd be lucky to go a day without having to recharge. Japan's Shin-Etsu Chemical Co. aims to change that, announcing a new kind of lithium-ion battery that boasts over ten times the capacity of the current industry standard.

Shin-Etsu was able to achieve such results by changing the structure inside the battery to a wafer semiconductor and substituting carbon-based material for silicon. You can stop holding your breath about it being included in the iPhone 6 though, because Shin-Etsu estimates that the battery will only go into mass production in three or four years.

The new battery technology will be offered to major electrical manufacturers not only in Japan but also around the world. As well as the obvious application in smartphones and mobile electronics, the technology is also expected to play an important role in the future of electric vehicles by allowing drivers to go further on single charge, making longer trips a possibility.

Japan's electronic materials industry is expected to take an even more dominating presence in the world market as a result of this move.

A welcoming move to everyone who's ever had to root/jailbreak their smartphone in order to remove bloatware and tweak system settings just so they can squeeze those precious extra minutes of battery life from the device.

Escape to the Movies: Earth to Echo - This Generation's ET? MovieBob 44 Comments