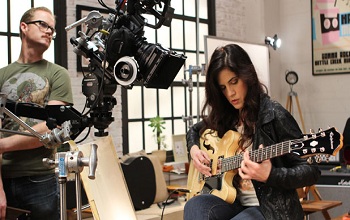 Rocksmith 2014 will better identify mistakes and offer a wider range of skill tutorials.

By most accounts music games are pretty much dead at this point. It's not like they didn't have a good run. There were a few years where practically every dorm room and family gathering in America sported a lineup of plastic instruments. Nowadays however, after an over-saturation of the market, music games pretty much fell apart with mainstay franchises like Guitar Hero and Rock Band seeing an end to new releases. Despite this, one property persisted on, carried by perhaps the ultimate music gaming gimmick: it would teach you to play an actual guitar.

Rocksmith, developed and published by Ubisoft, allowed players to plug an actual guitar into their PS3, Xbox 360 or PC and, through gameplay, learn the fundamentals of playing a guitar. It was fairly well-received at its launch and, while perhaps not a money printing title like Guitar Hero in its heyday, it garnered enough success to merit a sequel. Announced at E3 2013, Rocksmith 2014 was shown off touting new features like Kinect functionality. Just recently, Ubisoft took to talking up some of the other improvements the new version will integrate.

"In Rocksmith 2014, lessons will be much, much more dynamic and responsive: now we're not just telling you that you made a mistake; we'll tell you what the mistake is and how you should adjust to correct it," said Michael Madavi, senior community developer for Rocksmith 2014. "If Rocksmith senses that you're having trouble with a particular technique, it will pull you out of the interactive portion of the lesson and give you further instructions - this time with additional camera angles and tips." In short, Rocksmith 2014 has "grown to become a fully responsive personal teacher" with three times as many lesson videos as the original game, including tutorials on basics like tuning and "way more advanced techniques like tapping." Would-be guitarists eager to give these improvements a try can look for Rocksmith 2014 this October on PS3, Xbox 360, and PC.