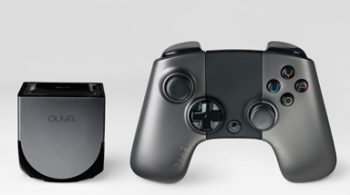 This offer to backers can be used to purchase items on Discover.

"It wasn't OK that some of you-our most loyal supporters-didn't get your Ouya until after it was on store shelves," says Julie Uhrman of Ouya. "Despite your frustrations, you've played on, putting up with our bumps and bugs as we work to get better every day." So Uhrman has something for folks like you, and that something is $13.37 worth of store credit, redeemable on Discover, the Ouya sales site. Kickstarter backers should be receiving instructions on how to redeem this store credit any time now.

"We've learned a lot over the past year," says Uhrman, "and we're going to continue making Ouya better every day!" One of the things the Ouya team has learnt is that people don't seem to be buying games on their Ouya, which may - or may not - be part of the motivation behind this store credit giveaway. Get them in for free, the logic may run, and once the customer's used to using the Ouya store, it's only a matter of time before sales go up. Besides, claims Uhrman, the fact that 27% of the player base has bought something is pretty good, for a free-to-play console that's only been out a month or so.

"If every company that got mixed results right out of the gate would have given up," said Uhrman when the 27% sales figure was announced, "we wouldn't have an iPhone, we wouldn't have an iPod." But the Ouya team seems to think there's a way around those results, and maybe it has a point. A quick sales stimulus could improve Ouya's long-term sales prospects. Only time will tell.