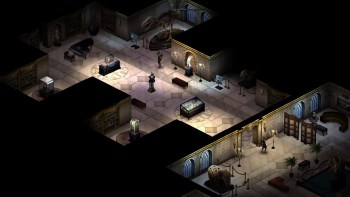 The Shadowrun Returns DLC campaign Berlin, which will be free to Kickstarter backers, is expected to be out in late October.

Shadowrun Returns is out and doing pretty well for itself, but work is still ongoing at Harebrained Schemes. In its latest update, the studio talked a bit about what it's been up to "after taking a deep breath," including squashing bugs and addressing balance and support issues. Work on the Linux version has also begun, although it's still in a very rough state, and the studio is "actively pursuing" localizations as well. If all goes as planned, Spanish, Italian, German and French versions of the game will be available by early October.

Speaking of October, that's also the month that the first DLC campaign, Berlin, is expected to hit the streets. "Development of Berlin art is already underway, and our design team is also starting to prototype gameplay and mission ideas for the Berlin campaign," Harebrained stated. "We're targeting late October for the release of Berlin."

As confirmed back in April, Berlin will be free to Kickstarter backers and anyone who preordered the collector's edition; everyone else will have to pay for it, although no price was mentioned.

Harebrained also said that work on the iOS and Android tablet versions of the game is ongoing and should be wrapped up within a couple of weeks. It's not committing to a release target just yet, however, because it's not known how long it will take to get through Apple's certification process.