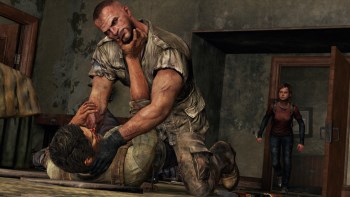 The Last Of Us Creative Director Neil Druckmann says there's nothing Naughty Dog can do about cuts to the multiplayer component of the game in Europe.

Back in late June, a sharp-eyed member of the Naughty Dog forums by the name of "Ramify" took note of the fact that The Last Of Us multiplayer is far less bloody in Europe than it is in the U.S. He posted still images and animated GIFs of the two versions illustrating the differences and it seemed pretty clear that something was up. He acknowledged that it didn't really have an impact on the gameplay but said, "I can't shake the feeling I did not buy the game in its entirety, and not how the developers intended this work of art to be played."

Plenty of others seemed to share his feeling - the forum thread is currently up to 48 pages - but even so, it took until the end of July before Naughty Dog responded to the inquiry. "The gore and violence ratings are subject to local regulatory boards in various countries, so the game must be slightly changed in order to accommodate those choices," a Naughty Dog rep wrote. "To be honest, I'm not sure what version Australia is getting. If you import the North/South American version, it will not be censored, but EU/UK will be."

A few days later, Druckmann put the kibosh on any thoughts of a "toggle" that would allow players who wanted it to ramp up the blood and guts. "The censorship came from standards in Europe," he wrote during an August 1 AMA on Reddit. "Nothing we can do about it. Sorry."

The single-player version of The Last Of Us, rather oddly, is uncensored in all regions.

Experienced Points: In The Last of Us, Joel Had It Right Shamus Young 89 Comments

SDCC2014: The Last of Us Movie "Won't Come Out For Years" StewShearer 9 Comments
Comments on