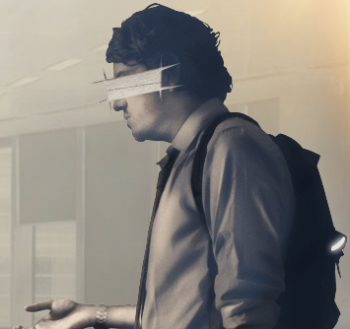 Is that a Sectoid, or a pink elephant?

On one of those lazy days when you come in to work, your brain, belly and kidneys protesting at the very idea of movement, you might want to give Hungover Edition a shot. Always assuming you don't get caught by the bosses, of course, but then that's the whole point behind this The Bureau: XCOM Declassified spoof, put out there by 2K. Can you, Bill Carter, get your dehydrated butt to the sweet, sweet caffeine? What about Big Al's sandwich? Or ... well, you get the idea. Nobody's claiming this is the most complicated game in the world, but it's a fun few minutes.

The Bureau: XCOM Declassified gets a sorta-kinda homage here, in that you'll be using your squad members - the weapons expert, psy warfare specialist and yeah, I don't get that last one either - to do all the dirty work. Will you opt for something sneaky, or a direct approach? Go too far and you'll get a written warning at best, your butt canned at worst. But then you got into this by staying up all night playing The Bureau, so the joke's on you, Bill. The domain was registered a day or so ago and, when it first popped up, some were convinced it was a new 2K IP. Well, in a sense it was, but probably not the one people were hoping it was going to be.

Fancy a pop at Hungover Edition? Head over here. As for The Bureau: XCOM Declassified, this Xbox 360, PlayStation 3, and PC title launches later this month.