Nintendo has sold a lot of hardware over the past thirty years.

It's easy to forget sometimes, what with the Wii U's sales being so abysmal that actual acts of nature could be to blame, that Nintendo has been in the console game close to thirty years, much of which was spent selling hardware hand over fist. Perhaps sensing that gamers could use a reminder of its once near ownership of the games industry Nintendo recently released its annual report which, among other things, included figures detailing just how much hardware and software the company has sold over its long history. Put succinctly, it's a lot. 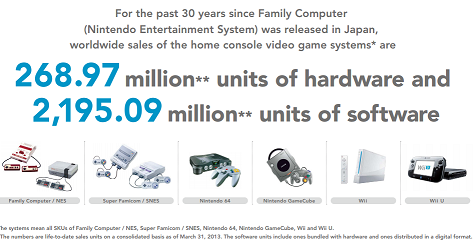 Since the launch of the Famicom in 1983 Nintendo has sold a whopping 287.97 million consoles along with 2.2 billion pieces of corresponding software. If you thought that was impressive, the house that Mario built has also moved an additional 385.15 million handheld units since the release of the original Game Boy along with another 1.91 billion units of portable software. That sound you hear coming from your mouth is a long, Reeves-esque "Whoa." 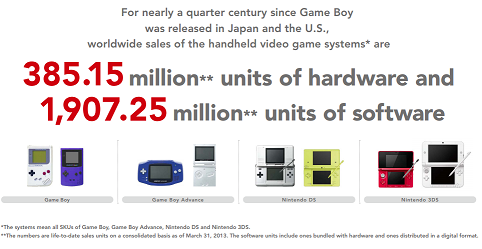 Granted, past accomplishments don't equal present day success. In fact, the annual report itself notes that the company, overall, posted an operating loss coming out of the most recent fiscal year. Even so, the numbers are nonetheless impressive and could arguably serve as a reminder for all naysayers that, no matter the company's current trials, its been in the business longer than many gamers have been on the Earth. In other words, the Wii U might be hurting but Nintendo itself is nowhere near down for the count.