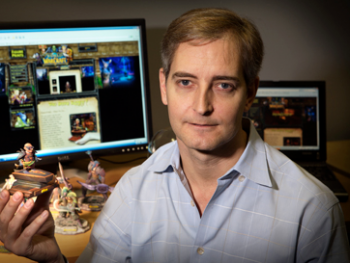 A lot of things changed with digital distribution.

"Who knows if there'll be big publishers in the future?" asks Xbox project co-founder and FigurePrints man Ed Fries. "There don't have to be." Maybe it will be a bunch of smaller studios, banding together for the larger projects, or pursuing individual interests when a large project isn't in the works. "That's where great games are going to come from," thinks Fries, because the value is in the game, not the publisher. Players don't care as much about developer brand equity as developers might like to think; players follow games, not the companies which make them.

It's distribution that's going to change the industry, according to Fries. In times past, retailers set the pace. The big distribution chains didn't want to deal with a thousand small studios; thus the larger development studios were created, in response to Walmart's need for a fixed supplier. Big developers had to exist in order to pay the costs inherent in a large supply chain. But brick-and-mortar's day is done, and digital distribution is the way forward. Digital doesn't have the overheads, or the supply problems, of a large retail chain. Digital can deal with smaller studios, without significant problems. This isn't so much fun for the developers, which now have to rely on constant, risky innovation in the hopes of pleasing a fickle audience. "That may be the future we're facing," says Fries. "We just have to accept that."