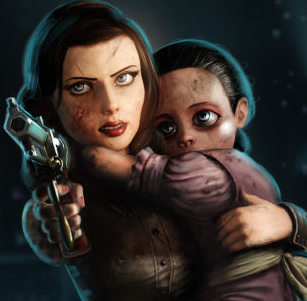 Putting Booker in a dress would be a betrayal, but it'd also be as funny as hell. Just saying.

"We have to be ever so careful to not betray what the player has already experienced of Liz in Infinite and what they're going to experience of Liz in the first part of the DLC," says level designer Amanda Jeffrey. Yes, you'll be playing as Elizabeth in Burial At Sea, the Rapture-based add-on to Infinite's Columbia shooting spree. The story's still about Booker and Elizabeth, and the second part "is very much her story," says Jeffrey. Putting you in her shoes is what that part of the story's all about, something that Ken Levine believes you're going to love. Assuming they fit, of course. I'm guessing she's somewhere in the 5.5 range?

"If we were to just put Booker in a dress," says Jeffries, "then that would be the most awful betrayal of what we're doing for Liz." No doubt deviantART already has a solution to that problem, but Jeffries is hoping to reassure gamers that, both from a personality and a play perspective, it won't be the BioShock you're familiar with. Using your brain, not your BFG, will be key to getting through the DLC. Ken Levine's drawing on a love of Buffy to create a situation in which emotional danger, rather than physical, is what draws the player in to the action. "The stake of survival," Levine says, "Is one everyone knows isn't real, so that's not very powerful." But other stakes, more emotional risks, can be much more interesting to play with.

"More than anything," says Jeffries, "we are trying to focus on making sure that the feel of playing as Elizabeth, and just moving through the environment, is a very different experience." That might mean playing with your keypad and controls, or it might mean playing with your mind. As for her power set, "she is not entirely godlike" is as much as Jeffries is prepared to say right now. Don't expect to Tear your way to a happy ending. As for exactly when this is due, no firm date has been announced, but sometime before March 2014 is the anticipated date.