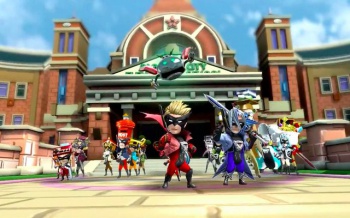 Great news (assuming you live in Japan or Europe): A demo for Platinum Games' The Wonderful 101 is now available on the Wii U eShop.

The Wonderful 101 is the latest effort from Bayonetta developer Platinum Games. It's described as a mass-action superhero adventure, which translates roughly to "players control a squad of superheroes and use their heroic powers to punch the stuffing out of gigantic creatures." If you're familiar with Platinum's games, you already know how bombastic this thing looks in action, so at this point what more do we have to tell you?

Not much, which is why Platinum has decided to drop the coy act, and instead just let us experience the game for ourselves. Unfortunately, in a break from tradition, the demo released this morning is currently only available to European and Japanese gamers. Platinum claims that a US demo is en route, but offers no solid release date for the Americanized demo.

As with almost all demos, this test of the game is available totally gratis. If you live in Japan or Europe (or have access to their eShop offerings), you can power up your Wii U and pull down the demo right this very minute. Once you've done so, if you can drag yourself away from the game for a few moments, leave your impressions in the comments section below. Those of us in the US are suddenly intensely jealous of your geographic location, so throw us a bone, won't you?

Update: The demo for The Wonderful 101 is now also available in North America.