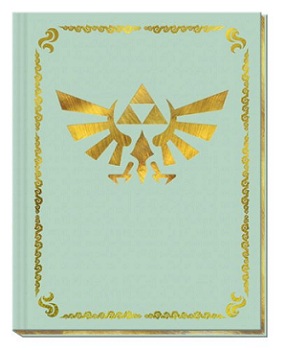 Prima Games is releasing an official collector's edition of its Wind Waker HD guide, complete with gilded pages and a cloth map of the Great Sea.

The Legend of Zelda: The Wind Waker HD earned a lot of attention when it was announced. Giving a shinier sheet of paint to an already gorgeous game, it looked to be exactly the sort of re-release that fans of a franchise love to receive. Now, in an attempt to deliver unto the world another bit of shiny memorabilia, Prima Games has announced that it will be releasing a collectible edition of its strategy guide to go alongside Wind Waker HD.

The Legend of Zelda: The Wind Waker Collector's Edition Official Game Guide, in addition to being a mouthful, will be hardcover and feature gilded pages to make it look all snazzy. Included among its contents will also be a nifty cloth map of the Great Sea. It will, of course, also feature the requisite contents you'd expect from a game guide; boss strategies, puzzle solutions and hidden item locations, among other helpful hints. While Prima has yet to confirm a release date for the Collector's Edition, Amazon has listed the book for pre-order at a moderate $35.99. The standard paperback edition is also available for $24.99.

Overall, the Collector's Edition looks like a nice package. Nonetheless, we have to admit that, in this day and age, it's arguably becoming harder and harder to justify spending money on walkthroughs when most of the same information can be found online for free. Prima's Wind Waker guide still manages to be an enticing package though, if only because it would look lovely on a shelf next to our copy of Hyrule Historia.

The Year That Christmas Was Awesome StewShearerOld 2 Comments