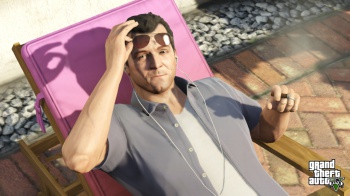 Nvidia seems to know something that we don't, and is something Rockstar Games is being very coy about - the existence of a PC version of Grand Theft Auto V. In an Earnings call, Senior IR Director of Nvidia Chris Evenden said:

"Many consumers look for PC as a general purpose device they can use for browsing, email, social media video. But much of this can be better served by a tablet. In contrast, gamers are preparing their systems for a strong roster of games coming this fall, including blockbuster franchises, such as Call of Duty: Ghosts, Grand Theft Auto V and Assassin's Creed IV"

The fact that he specifically mentions the title seems to suggest that he knows for sure that it is coming to PC. GTA titles typically appear on the PC six months to a year after their console releases, although this time developer Rockstar has yet to confirm a PC edition, despite an online petition amassing over 200,000 signatures.

Evenden went on to claim that PC games are where the real money is at, estimating that in 2015, PC game revenues will exceed that of PlayStation and Xbox combined.

"Open platform such as PC and Android are outgrowing the world [sic] gardens of the traditional console market. They benefit from more innovation. Nearly half of the developers surveyed at GDC recently who are working on PC games compared only 11% on Next Gen consoles. PC game revenues are expected to reach around $20 billion annually by 2015, whereas the total for both PlayStations will be less than $10 billion and Xbox is only around half of that"

Update: Sorry to disappoint guys, but it looks like this was just a slip-of-the-tongue on Nvidia's part. It has offered the following statement:

"Please note, during our Thursday's earnings call, our investor relations team provided a list of important games that gamers are looking forward to on PC this fall, and included Grand Theft Auto V on that list. This statement was made with the intent of expressing enthusiasm for the games industry in general, and was not intended to represent specific knowledge possessed by NVIDIA. NVIDIA does not have information on any possible PC version release of Grand Theft Auto or its availability. We deeply regret the error."