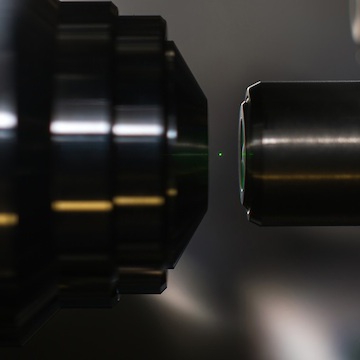 Levitating diamonds could be used as a form of data storage and transmission.

Researchers at the University of Rochester sprayed an aerosol containing dissolved nanodiamonds into a chamber with two lasers. The diamonds are naturally attracted to lasers (aren't we all?) and drifted into the laser's path. "It takes a couple of squirts and in a few minutes we have a trapped nanodiamond," states graduate student Levi Neukirch. "Other times I can be here for half an hour before any diamond gets caught. Once a diamond wanders into the trap we can hold it for hours." Once trapped, a second laser causes the nanodiamonds to emit light at given frequencies.

The technique could be employed in optomechanical resonators, systems in which vibrations are controlled by light. Nick Vamivakas, assistant professor of optics, states: "We are yet to explore this, but in theory we could encode information in the vibrations of the diamonds and extract it using the light they emit." The technique could also be used in quantum information and computing, or, to pull off the world's tiniest heist.