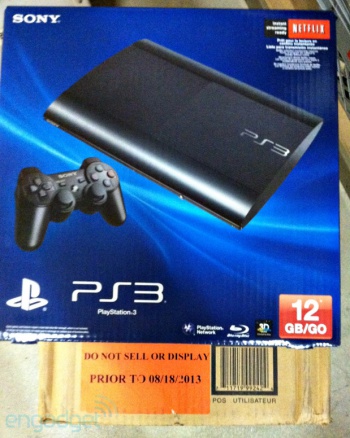 The new PS3 model uses 12 GB of flash memory in favor of a traditional hard drive.

The PlayStation 4 may be right around the corner, but the good ol' PS3 still has some knockout games, like the recently released The Last Of Us and the upcoming Grand Theft Auto V. If you've yet to jump on the Sony bandwagon, or are looking for a replacement to your old clunky PS3, Engadget reports that the 12 GB PS3 Slim that was previously exclusive to Hong Kong and Europe is coming stateside.

This new ultra slim PS3 uses 12 GB of flash memory, instead of the traditional hard drives of other PS3 models. It will set you back just $200 - $70 cheaper than the current current 250 GB Super Slim. Obviously, 12 GB is not really enough for those of you who have (or plan on having) a large digital library, but for people who just want to see what all this PlayStation fuss is about, it's a perfect super cheap entry-level system.

"The smaller Flash drive isn't coming to North America, and a lot of that reason is the digital consumer. We really want to make sure, out of the box, that there is an option for them to be able to download that content. That is really critical for us, very very important."

But it now looks like Sony has pulled an "Xbox 180" on this decision, as an image of the system in a Kmart stockroom in the United States has now surfaced, featuring a "do not sell until" date of August 18th.