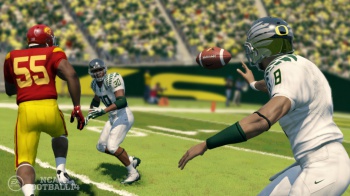 Almost exactly one month ago, the NCAA announced that it would no longer license the rights to its various Bowl Games and conferences to EA for use in the publisher's sports titles (most notably, the NCAA Football series). While this seemed a major blow to EA's future ability to capitalize on collegiate athletics, there was a still a ray of hope for the firm, in that individual schools and conferences are able to sign their own agreements with EA. Unfortunately for the megapublisher, it looks like the major players in college sports aren't too keen on working with the company in the future.

According to an ESPN report, the Southeastern Conference, Pac-12 conference and Big Ten conference have all announced that they won't be working with EA on future titles. For those of you who don't follow sports, just know that these are three of the biggest conferences in the nation, and include such notable schools as the University of Oregon, the University of Alabama and Ohio State University. If you hope to make a college football game, those are exactly the prestigious schools you'd want to feature.

Where EA goes from here is a mystery. The company has yet to comment on this most recent change, despite sounding so positive that it would be able to secure agreements with the individual schools and conferences after the NCAA decision was announced last month. This may not be the end for EA's college sports games, but if we see another NCAA Football title, don't expect it to look much like the recently-released NCAA Football 14.