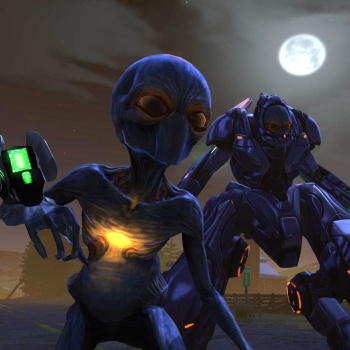 The dreaded first person shooter set in the XCOM came out this week to middling reviews, but strategy fans can rejoice because Firaxis is still letting you blast aliens the way you should - one turn at a time. Firaxis and 2K Games announced the imminent release of XCOM: Enemy Within coming on November 12th, 2013. Enemy Within doesn't advance the storyline in any way, but it adds new features and mechanics to the same alien invasion of the 2012 surprise hit. XCOM: Enemy Within will retail for $29.99 for the PC and Mac, and a separate boxed copy can be had for your Xbox 360 or PS3 for $39.99. No iPad or next gen version will be coming in November, but 2K representatives said more news on that front would be coming soon.

The standalone expansion introduces a new resource called Meld, which must be found on every tactical map instead of merely earned in the strategic layer. You can spend the Meld you find to upgrade your XCOM soldiers in two new ways - Gene Mods giving surreal powers gleaned from alien autopsies and MECs. MEC stands for Mechanized Exoskeletal Cybersuit; you'll be able to fight aliens in giant robot suits. There's also a slew of new equipment, maps, enemies and advances to multiplayer in XCOM: Enemy Within.

For the full rundown on everything Enemy Within has to offer, The Escapist spoke with Lead Designer Ananda Gupta. He's very excited about one specific aspect of XCOM that fans have been asking for - international voices.

"One of the things that our fans have been most vocal about, no pun intended, is all the soldiers sound American, so what we decided to do was reorganize the voice data so that all the localized languages are available no matter what language you installed it," Gupta said. "Assuming you install in English, you have French, Italian, German, Spanish, Russian and Polish as available languages for your soldiers. They can all speak different languages; you can have your whole squad speak Spanish if you want. It's up to you, and that we feel will really make XCOM feel like the international game that it's always been intended to feel like."

To learn more all the changes and added features in XCOM: Enemy Within, read the full interview with Ananda Gupta here on The Escapist Magazine.

Take My Money: Fight Back with the Best XCOM 2 Gear TrishaHershberger 1 Comment
Comments on