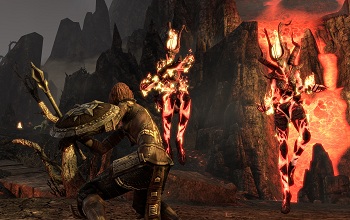 The Elder Scrolls Online will charge $14.99 a month for unlimited use.

If you're anything like us then you're probably excited for The Elder Scrolls Online. The game thus far has looked very much accessible for both fans of single and multiplayer, granting it a flexibility that will likely come in handy for the task of roping in gamers used to an Elder Scrolls universe made for them and them alone. One element that might not be as helpful in attracting gaming loners however, are recently confirmed subscription fees players will need to pay if they want unlimited access to the game.

It's an interesting move on the part of Bethesda and ZeniMax Online Studios, especially in the light of other recent big name MMOs failing to gain the traction needed to maintain subscription based services. That being the case, the game's developers believe it to be the best fit for The Elder Scrolls. "The Elder Scrolls Online was designed and developed to be a premium experience," said Matt Firor, general manager of ZeniMax Online. "Hundreds of hours of gameplay, tons of depth and features, professional customer support - and a commitment to have ongoing content at regular intervals after launch. This type of experience is best paired with a one-time fee per month, as opposed to many smaller payments." Firor also suggested that players will be "appreciate not having to worry about being 'monetized' in the middle of playing the game."

According to Firor, the current plan is to charge a monthly fee of $14.99, or the equivalent amount depending on a player's region. In return the developers plan to offer consistent premium updates that add new quests, zones, skills, dungeons and overall content after the game launches. Whether or not this will be enough to hold onto gamers' wallets, however, is the emergent question. In turn, we're curious as to what our readers think. Are you up for a monthly fee, or will you be sticking to the Elder Scrolls offline?