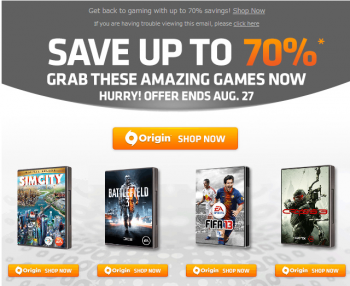 Origin's entire library is on sale to celebrate GamesCom 2013.

"Origin is not as good as Steam," they say. "Why not?" I ask. "Well, the Steam sales for one!" they reply. It looks like Origin is now swinging right around with that one, kicking off a massive sale across its entire library of games, knocking off up to 70% off some titles, such as Battlefield 3, Tomb Raider and The Sims 3.

Other noticeable sales include 50% off the Mass Effect Trilogy, Battlefield 3 Premium, and Crysis 3. Of course, some of these games were available in the recent "pay what you want" Humble Origin Bundle, but a lot of them, most notably, various game's DLC packs, were not included. All SimCity DLC and The Sims 3 expansion packs are 50% off, for example.

The sale runs from now until August 27, and is in celebration of GamesCom 2013 where EA is showing off some of its future titles, including Battlefield 4, The Sims 4 and Fifa 14.

All in all there are some pretty good deals going on here. Origin has been really trying its pants off to improve its image these days, first with the Humble Bundle, then with the radical new "Great Game Guarantee" policy that offers full refunds for EA games, and now a massive Steam Summer Sale-type sale.

Is this enough to make you "turn to the dark side" and try out Origin? Or will you still cling desperately to Steam's shiny toys, like trading cards, big picture mode, and of course, a considerably larger library of games?