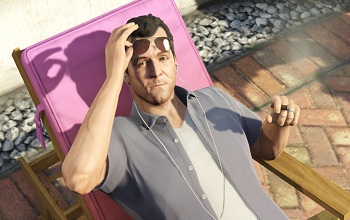 While Grand Theft Auto IV was arguably more somber and serious in its tone than past entries in the series, the franchise as a whole is still known for boundary pushing that occasionally steps into the gratuitous. For instance, the ESRB recently released its rating for Grand Theft Auto V (M of Mature, of course) and the rating summary gives a few glimpses into the game's content that might raise a few eyebrows prior to its launch.

Perhaps most notably, it describes a sequence that includes "male cult members with exposed genitalia in a non-sexual context." Now, obviously we're not pitching a fit over the presence of the male anatomy in a videogame. Being adults, many of whom possess the requisite junk that typically come with being a man, the sight of some "exposed genitalia" isn't going to make us faint from shock. That being the case, with Grand Theft Auto generally being a favorite whipping boy of the family values crowd, you can probably expect this bit of nudity to appear as a bullet point on future "why games are the devil" lists for years to come. We only imagine that things like "topless lap dances," "implied fellatio," "depictions of dismemberment," and "a brief instance of necrophilia" will also be included.