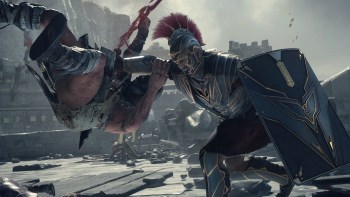 So you pay $59.99 to preorder Crytek's latest, and then extra for multiplayer armor kits?

Here's a fun one: Crytek's Ryse: Son of Rome, a hack-and-bash that takes you from ordinary Roman Legionary up through to high rank and command of legions, will feature microtransactions. Yep, a game that costs you $59.99 preorder - and which presumably won't get any cheaper after launch - wants you to shell out a little extra to buy what amounts to booster packs, either with coin earned in-game or real money, to give you benefits in multiplayer.

The announcement comes courtesy of Gamescom 2013. The booster packs contain "random sets of loot" according to Microsoft, and the tier you purchase - Bronze, Silver or Gold - determines how likely it is you'll get sweet gear, or something less advantageous. Progression is determined by armor sets, and this system ensures that the best sets go to those who are prepared to pay. Microsoft describes this as a benefit for customers who can't quite afford the really good stuff with the currency they earn in-game. "Say for instance a gold pack costs 15,000 gold, [and] you've only got 12,500 you can actually buy the difference and only spend a little bit to make it go to a Gold Pack," says Microsoft. "So we offer some variety there."

Variety on offer to the ones with cash to pay for it. Sounds like fun.