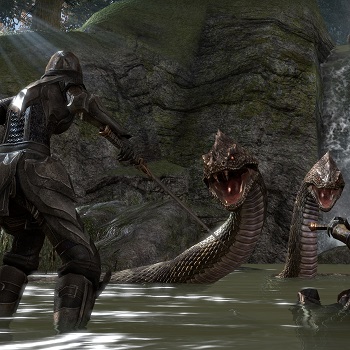 Yesterday's announcement that The Elder Scrolls Online will require a monthly subscription fee was met with a certain degree of surprise from an awful lot of gamers. Conventional wisdom is that the subscription model is effectively dead, a widely-held opinion reinforced by the spectacular failure of Star Wars: The Old Republic, which switched to a free-to-play model after less than a year of operation. So how does Bethesda figure The Elder Scrolls Online can make it work, if a money-printing IP like Star Wars couldn't?

Firor said The Elder Scrolls Online is a "world," and Bethesda doesn't want monetization options taking players out of it. "It's like, I go into a dungeon, if I don't have access to the dungeon it pops up a window: you don't have access to this, go buy 50 credits. We didn't want that experience. That's not an Elder Scrolls experience," he told Eurogamer. "We wanted to do monetization outside of the game. So, if I pay for a month at a time, I have 100 percent of the game. I don't have to worry about paying one more cent. I'll never run into a pay gate and I'll be in the world."

Bethesda also wants a "steady forecastable revenue stream" so it can effectively plan and pay for content updates. TESO will launch with the Mages and Fighters Guild questlines built-in, and Bethesda plans to add the Thieves Guild and Dark Brotherhood in a future update. "Those are 15 hours of content apiece," Firor said. "We're talking major new stuff, which is going to be coming out constantly. And the way to do that the best for us is with a subscription."

The Elder Scrolls Online is currently expected to launch in early 2014 for the PC, Xbox One and PlayStation 4, at a cost of $14.99 per month.