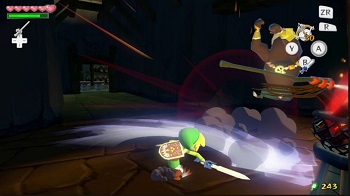 Nintendo is an empire of nostalgia. Its roster of characters has been gently worn by the hands of time, carefully managed by a team of handlers. While the upcoming Wind Waker HD will stay true to the original decade-old nautical adventure, Nintendo's latex-gloved specialists are doing more than just giving it a facelift. To maintain its time-defying properties, Wind Waker HD will also feature a new difficulty setting and optional new sailing mechanics.

Upon starting Wind Waker HD, players can select either Normal or Hero Mode. Normal Mode plays almost exactly like the original game. If this isn't your first time sailing around the Great Sea, you can kick it up to Hero Mode, where enemies deal twice the damage. To make matters worse, the only way to heal is to either purchase potions or to quaff a fairy. It sounds like a great new challenge for those who can sail through the game by memory alone.

Previously, sailing about the Great Sea was mostly controlled by the winds, which you could change with a song. Wind Waker HD will have a Swift Sail feature that allows you to remove that extra step and simply sail wherever you will, with the wind always at your back. That's a feature that even weak mortals playing on normal mode can take advantage of (if they so desire). While the new updates are fairly minor compared to the rewiring that Master Quest received, they seem to safely straddle the line between a faithful update and a modern upgrade.

The Legend of Zelda: Wind Waker HD sails onto the Wii U this October.