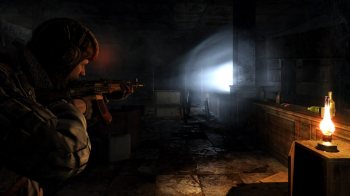 Metro: Last Light was a pretty big hit as far as post-apocalyptic shooters set in a horrific underground nightmare go, with solid review scores and positive feedback from players. In that light, it's not terribly surprising to hear that there will be more Metro in the future, but in case there was any doubt Deep Silver CEO Dr. Klemens Kundratitz said at Gamescom that he's glad the publisher acquired the brand and that it fully intends to do more with it in the future.

"While [Metro: Last Light] launched in a very dry space in the gaming calendar this year, it still got a lot of attention," he told Joystiq. "Our ambition is to absolutely continue with that brand and we will also, in the next phase, look to making it more accessible for a broader gamer audience."

That last bit is perhaps a bit alarming, especially if you (like me) are among those who felt that Last Light was already a little too soft and cuddly compared to its predecessor, Metro 2033. Asked about the possibility that "broadening" the audience could lead to problems with fans or the license holder, Kundratitz wasn't exactly forthcoming, saying little beyond the fact that Metro 2033 author Dmitry Glukhovsky is a solid dude and that he'd have some input as to the direction of future games.

"He enjoys the game, the success of the game and we have a good relationship," he said. "He is a great contributor. Also, going forward, as he has been very positive contributing to the last game - I think he can play an active role for whatever comes in the future."