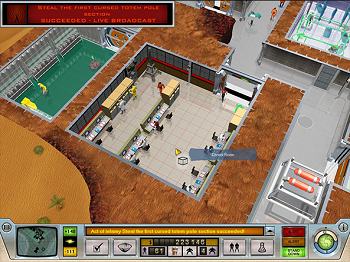 When Rebellion announced the rebirth of Evil Genius as an online F2P game, the response was rather mixed. While most voices were happy to see the beloved strategy title again, seeing it squeezed into a Zynga-esque sausage casing wasn't exactly the triumphant return they expected. Regardless, all the beta slots were claimed less than 24 hours after the announcement, so interest isn't a problem. To assuage many of the concerns voiced since then, Rebellion has posted an open letter to the community. It explains why they decided to go F2P, how they're avoiding becoming Evil Genius-Ville, and even teasing a true sequel in the future.

"For independent studios like Rebellion to survive it's important that we look beyond the console, PC and mobile platforms we know so well," the post states. "Zynga and Facebook are hubs with millions of gamers who can start playing any game in just a couple of clicks. There are almost no barriers. This is why free-to-play is so exciting for both developers and gamers, and yes, it means we can bring Evil Genius to a new audience too."

Necessity or no, F2P social games carry a stigma around them like the odor of a corpse. Thankfully, Rebellion says that they're steering clear of some of the more distasteful elements. First off, there will be no energy mechanic. While certain activities will take different amounts of time, players won't be limited by how many actions they can take per day. Players can spend currency to speed up the waiting time on actions, but it claims that there won't be any pressure applied to do so.

Rebellion admits that Evil Genius Online still won't please every fan. However, it still has its eyes on a true sequel. "We've taken concepts for an Evil Genius sequel to publishers before but we weren't able to secure the funding we needed. However since then, we've looked into alternative ways to get this game funded and created. We are going to make this happen. And it's going to be soon." Here's hoping we can spend some currency and speed up the construction of an Evil Genius 2, perhaps via Kickstarter?