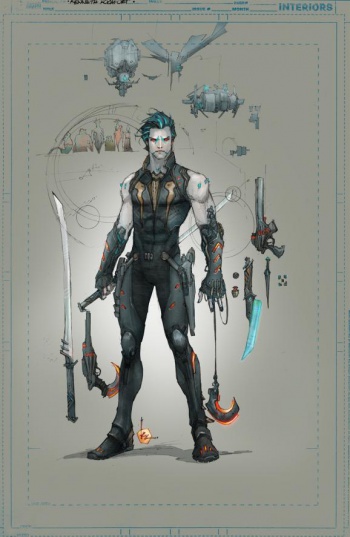 DC Comics' New 52 Lobo will be phased out for a character that has little to do with "mindless" violence.

For better or worse, fictional reboots are a big part of our popular culture. When handled correctly, a well-planned reboot can update and translate what works about its characters for new audiences (see Battlestar Galactica, Christopher Nolan's Dark Knight Trilogy). On the other hand, a poorly-planned reboot neglects what worked for the original story, alienating fans in the process. Take DC Comics' Lobo. Originally intended as a parody of violent superhero stories, this inter-stellar bounty hunter became a popular anti-hero who was featured in comic books, television shows, and videogames. DC's New 52 reboot, meanwhile, changed the character into a villainous slaver who wasn't well-received by loyal readers. In response, DC will reboot Lobo yet again, altering his image to be physically attractive and mysteriously brooding when compared to the mindlessly violent persona that defined him.

"This Lobo is equal parts strong, vicious, and driven," writes DC editor-in-chief Bob Harras. "There's a darker and more logical idea about what a force of nature like him is capable of. After all, this is someone who can infiltrate high society, fly a space ship, and adhere to a very specific moral code that's not your typical anti-hero one."

If you're familiar with Lobo's personality, you might be understandably confused. If you're not familiar, know that "high society" and "moral codes" have never been Lobo's defining traits. According to Harras, however, this will be Lobo's official modus operandi, since the previous character was simply an alien that stole his respected name. DC will debut the new New 52 Lobo in Justice League #23.2, as he hunts his identity thief to prove once and for all who the "real" Lobo is.

Lobo's new design was one of many created by Kenneth Rocafort, some of which are attached below. As you can see, the version selected by DC's editors is colder and leaner than what fans are used to, barely having any resemblance to the original Lobo at all. In fact, this New 52 Lobo has much in common with countless brooding and one-dimensional fictional badasses, several of whom already populate DC's catalog. To be fair, nobody accused the original Lobo of being a well-rounded character, but at least he had a unique personality to make up for it. What will this version of Lobo have that makes him stand out?