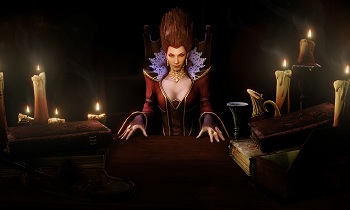 Precursor Games' second attempt at crowdfunding Shadow of the Eternals has fallen short.

In July, Precursor Games returned to Kickstarter to re-launch a campaign aimed at funding Shadow of the Eternals, the "spiritual successor" to the cult classic Eternal Darkness. The studio had voluntarily ended its first attempt at a Kickstarter in June. Its return to the crowdsourcing scene saw the developer shooting for a goal nearly half what it had originally asked. Unfortunately, even asking for less, it would seem that success was still outside of the studio's reach. With only $323,950 of its $750,000 goal in the bag, the Shadow of the Eternals campaign has ended.

In a statement on its Kickstarter page, Precursor Games offered thanks to its backers as well as its partners and friends in the game industry. The developer is now taking "a one week break" after which it will be upgrading its forum software and, presumably, deciding where to go from here. The studio was firm however in its belief that Shadow of the Eternals will see an eventual release. Though it admits that it's "unfortunate that we were unable to crowd-fund this project," it affirmed that "we have not given up."

The root of Precursor's Kickstarter failure could be pegged on a number of factors. The studio's close connection to the troubled Silicon Knights, which was fairly well gutted after an infamous court battle with Epic Games, could be one. The involvement of Denis Dyack, Silicon Knights controversial founder, may have posed similar problems for some potential contributors. It probably also didn't help matters that Precursor founder Ken McCulloch was recently arrested for the possession of child pornography. This bevy of bad press, coupled with the arguable niche status of Shadow of the Eternals, could easily have limited its pool of willing Kickstarter contributors. Whatever the cause, it looks like it's back to square one for Precursor.