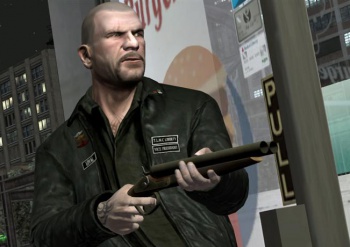 Police in Louisiana believe an eight-year-old boy who murdered his elderly caregiver was likely driven to do it by Grand Theft Auto IV.

87-year-old Marie Smothers was killed by a single gunshot to the back of the head fired by an eight-year-old boy in her care. There's no apparent motive for the killing and according to the East Feliciana Parish Sheriff's Department, "the victim and the juvenile had a normal, loving relationship, and even shared the same bedroom." So what drove the boy to commit murder?

At first he told police that he accidentally shot Smothers while he was playing with the gun (that she owned) but the investigation concluded that he actually shot her in the back of the head intentionally while she was watching television. His specific motives remain a mystery, but the police implied very strongly that a videogame - you know the one - was a causative factor.

"Although a motive for the shooting is unknown at this time investigators have learned that the juvenile suspect was playing a videogame on the Play Station III, Grand Theft Auto IV, a realistic game that has been associated with encouraging violence and awards points to players for killing people, just minutes before the homicide occurred," the sheriff's department said in a statement.

Fox13Now.com helpfully pointed out that debate over the connection between virtual and real-life violence has heated up since the Sandy Hook Elementary School mass murder last year, saying that "like many young males who went on shooting rampages in the past, the shooter, Adam Lanza, was reportedly obsessed with violent videogames." It also noted that "studies by reputable academic and medical sources have come to a variety of conclusions over the years," and that the Obama administration has called for further research.