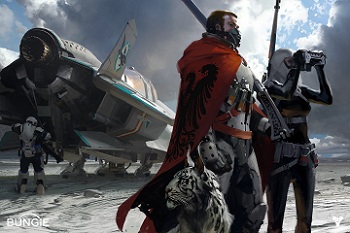 There are a few franchises that have legitimately shaped the cultural landscape around them. This tier of instant recognition, of cultural importance, is perhaps the ultimate goal for creators of entertainment to strive for. It's also the goal that Bungie's aiming for with its social shooter Destiny.

"We like to tell big stories and we want people to put the Destiny universe on the same shelf they put Lord of the Rings, Harry Potter or Star Wars," said Bungie COO Pete Parsons. It's a stratum of success that Bungie has perhaps broached upon in the past. Its work on the Halo series enthralled millions of fans, many of whom would follow the franchise for years after its initial inception. That said, Parsons thinks Destiny will eclipse even Halo's success. "We were extremely proud of what we achieved with Halo... I'm pretty convinced we are going to do it again with Destiny in a way that maybe even Halo never achieved before."

The key to Bungie's plans for greatness may lie both in Destiny's social focus and the company's longevity based plan for the game. "I think the big [next-gen] advancements are how do we keep bringing people together? How do we make a game that's not just about 'here are a bunch of people in the same room together', but it's about what we want to do, which is to give you really finely crafted storytelling and competitive multiplayer and remove the barriers between those two," said Parsons. "You can build your avatar for weeks, months or years while enjoying storytelling and then move into multiplayer in that same build."

While Destiny's eventual ability to stand alongside the titans of entertainment is still perhaps up in the air, you nonetheless have to appreciate the obvious ambition driving both Parsons and Bungie. Many studios and publishers occupy themselves with the short term; what they can get to gamers the fastest with the biggest profit margins. Bungie isn't the only developer aiming to win the long game, but it's nonetheless refreshing to see a studio set embrace ambition rather mere adequacy.