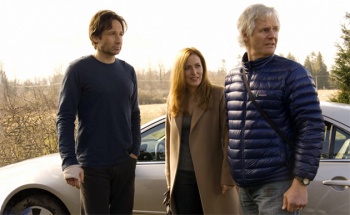 The last X-Files movie may not have been too well received by fans and critics alike, but it isn't dousing creator Chris Carter's hopes of a third movie. Better still, he is considering British funny-man Simon Pegg for a guest role, if the movie were to go forward.

Fans of the series will know that "colonization date," the date when Aliens were set to invade and take over the earth, was set at December 22, 2012. That date has well and truly passed, and Carter thinks that that's too important to ignore. Unlike the second film which was fairly stand-alone, a potential third film would be deeply tied into the X-Files mythology.

"The colonization date (which was December 22 2012 in the series) has passed, and that is something we wouldn't ignore," Carter explained. "For the second movie, we only had the budget for a standalone story, but we want to go back to the mythology."

Carter noted while the decision was mostly in the hands of 20th Century Fox, he insisted that "all of us are interested in putting the band back together."

As for Pegg, Carter brought up that Gillian Anderson, who portrays Agent Scully, worked with him in How To Lose Friends And Alienate People, and he has been interested in bringing him on board as a guest role for some time.

"We actually thought about putting him in the second movie, but there was no part for him. I certainly would think about him if we were to go forward in any way."

Escape to the Movies: Ender's Game MovieBob 194 Comments
Comments on