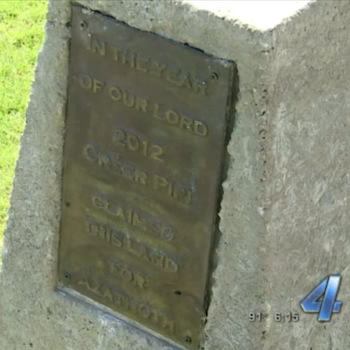 It's a fact of human psychology that we can easily be influenced by the popular, well-known people around us. Celebrities are often paid large sums to endorse things like beauty products or even their favorite stores on the Citadel. What you don't see too often are fictional dark gods of the twisting chaos promoting restaurants, but that's exactly what happened. Overnight, a concrete pillar with an inscription dedicating it to H.P. Lovecraft's fictional deity Azathoth appeared in front of the Paseo Grill in Oklahoma City.

While modern, abstract artwork is common in the Paseo District, ones invoking dark names of madness do stand out nonetheless. The extremely heavy monument, which appears to be ripped from its original moorings, has a plaque with the inscription "In the year of our lord 2012 Creer Pipi claimed this land for azathoth."

Like much of the Lovecraftian mythos, Azathoth is only ever hinted at in his stories, once being described as the "blind idiot god Azathoth, Lord of All Things, encircled by his flopping horde of mindless and amorphous dancers," which sounds like this guy I met at a party once. He's also the center of "Ultimate Chaos", which is far too close to being a Rob Liefeld comic for my tastes.

The restaurant will wait about a week to see if anyone claims the monument, so make your pilgrimages while you can. Meanwhile, the residents seem nonplussed by the cosmic horror about to be visited them. "Well, it's not straight," a local commented. "It's not supposed to be there."