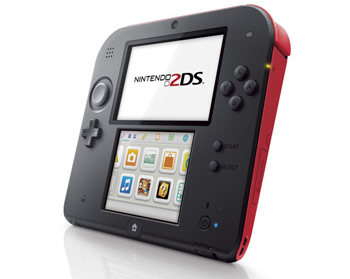 While it may not be for you, Nintendo is covering its bases.

The 3DS without the 3D, the Nintendo 2DS plays both 3DS and DS games in 2D, Nintendo announced today. The Nintendo 2DS will be released Oct. 12. It still includes many of the 3DS features such as WiFi, even the AR games and 3D camera. These functions just won't be displayed in 3D unless transferred to a 3DS. On the appearance, Nintendo of America president Reggie Fils-Aime described the 2DS as "a standard 3DS laid all the way flat, and with the depth slider all the way down. Everything else is there in the system."

Nintendo made it clear to parents that the 3DS is recommended for children seven years old and up, leading them to market the 2DS to five- and six-year-olds as their first handheld gaming device.

The 2DS will be $129.99 and launch in red and blue models. Because the handheld is flat, instead of closing it like the 3DS to put it in sleep mode, the 2DS's sleep mode is activated via a slider. The 2DS is also thicker at the top than at the bottom, making the screens angled for better visibility when placed on a flat surface.

In addition, Nintendo announced a price cut for the Wii U Deluxe at $299, matching the price for the Wind Waker HD bundle. Fils-Aime told IGN the price cut was straightforward and "the focus on heightening the value for Wii U is now that we are in position where we've got a regular pace of great software." The price cut begins Sept. 20.