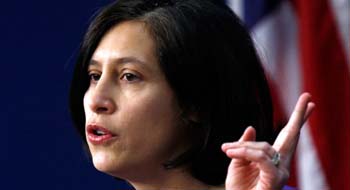 Known as the "copyright czar," Victoria Espinel has left the White House to lobby government for the software industry.

In 2008 US Congress created a position to aid intellectual property reform legislation. With that position, Victoria Espinel became the US government's top intellectual property enforcer, now empty in Espinel's leave as she joins the Software Alliance, whose three-letter acronym tacks on an extra letter at the beginning. The BSA works with governments around the world to lobby on behalf of companies' interests, some of which include Apple, Microsoft, and Oracle.

Espinel was at the forefront of legislation such as the six-strikes plan, pushed by Hollywood and major record labels, which called for ISPs to reduce internet speeds or eliminate internet service for repeated occurrences of file-sharing. As stated on their website, BSA investigates tips of alleged software piracy and then files civil lawsuits, advises policymakers on anti-piracy legislation, issues thousands of requests to ISPs and website managers to remove pirated software, and "serves as a knowledge center and catalyst to encourage cooperation and forge consensus among industry and governments." Microsoft, one of BSA's largest members, paid the group $1 million or more. The BSA spent $730,000 to lobby Congress in the first half of the year and also donated $35,000 to political candidates.

Espinel's departure from government and into a lobbying trade group is known as the revolving door, where governments hire industry professionals for private sector experience, and in turn industries and especially lobbyist groups hire ex-government officials for their influence. Espinel will begin her duties as BSA president on Sept. 3 and resigned from her government position two weeks ago.