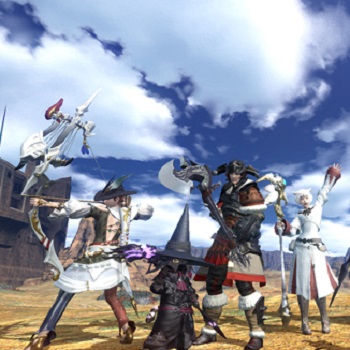 Producer & Director Naoki Yoshida said FF14's launch problems are all due to underestimating the excitement.

Way more people wanted to give Final Fantasy XIV: A Realm Reborn a shot than Square Enix anticipated. After the disastrous launch way back in 2010, FF14:ARR's new director/producer Naoki Yoshida - known to fans as Yoshi-P - said he assumed many Western gamers would let others test the waters first instead of flooding into servers on day one. He was humbled at the response, as he said when I got to speak with him through a translator at PAX Prime 2013. It must be frustrating to have to go through a shaky launch yet again, especially since the buzz from the beta was so strong, but Yoshida still finds himself doing damage control.

"I want to start off by thanking Western fans for keeping an open mind this whole time," Yoshida said. "We had a rocky launch [in 2010] and we lost a lot of trust. Thank you for giving us a second chance, for that we really thank you."

As for the current server problems and long queues afflicting the current launch of A Realm Reborn since August 27th, Yoshida was very apologetic. "We didn't expect this kind of response at launch. We thought players would let others take the plunge," he said, based on how bad it was in 2010. The number of players trying to log into FF14:ARR has "exceeded expectations."

That said, things are in motion to alleviate the problems, and a fix will be coming sooner rather than later. "Our server team is working around the clock to fix the issues," said Yoshida. "We are working on an update to distribute the server load that will go live on Wednesday [Sept. 4th] that will clear everything up. Then we'll be ready to take the next step with our fans."

Yoshida also wanted to clear up a big miscommunication regarding player videos of FF14 footage on YouTube such as Let's Plays or walkthroughs. He said there are no restrictions going forward, you can post whatever videos you like without fearing the wrath of Square Enix taking them down.

As for players frustrated that they can't play with their friends on the right servers, Square Enix is working on a server transfer program. It's unclear if there will be free transfers offered, or if a small fee will be involved. Yoshida wants to avoid the situation where all the players transfer to the same server for free, but we should see a transfer system for FF14 in place in the next month or so, and we'll get more details on pricing then.

Okay, whew, damage control over. Let's talk about the game. Most people who have gotten to play ARR have thoroughly enjoyed the innovations it brings to the MMO space, but there are still a few nagging design issues. I asked Yoshida about the lack of dedicated healing classes in the first few levels.

"The Arcanist actually has enough healing spells to make due in most situations until you get to level 30," Yoshida said. "We will probably make a change in the duty finder to designate the Arcanist as a healing class so that it's easier to group up with them."

Surpisingly enough, Yoshida said their internal metrics say the problem isn't a lack of healers at those levels, but a dearth of tanks. "We are considering offering bonuses to the tanks so that more players choose to play them," he said.

FINAL FANTASY XIV: A Realm Reborn is a massively multiplayer online role-playing game (MMORPG) that invites you to explore the realm of Eorzea with friends from around the world.

FINAL FANTASY XIV: A Realm Reborn lets you party up and adventure with a multitude of players from across the globe. Forge friendships, mount chocobos, and board airships as you and your companions create your own unique stories in Eorzea. All the classic elements from the series that you have come to know and love are waiting!

Set out alone or enlist the aid of friends as you undertake epic quests, battle familiar FINAL FANTASY monsters, and acquire unique abilities and equipment. Embark on the adventure of a lifetime to help reforge the fate of Eorzea!

One thing I was confused about when FF14:ARR was first announced was how Square Enix decided to stick with the subscription model, despite the obvious benefits of free to play in the current market. I asked Yoshida why he choose to stick with forcing the player to pay 15 bucks a month.

"Final Fantasy 14 was developed using all Square Enix's money, there were no outside investors or publishers," he explained. "So if FF14 is in the red, losing money, we can wait it out until the subscriptions stabilize.

"We stuck with subscriptions because we wanted a stable amount of money to pay developers to develop patches on time. We didn't want to get into a situation where we couldn't afford to make a patch," he continued. "As a producer, I of course will be watching how the money flows and will evaluate the situation. If we had to change to a free to play model, we would probably offer a hybrid model with free to play servers and subscriptions servers, but it's not something we have planned right now."

I'm skeptical as to whether the free to play model features has such a high fluctuation of income, but it seems Yoshida's information points to that. I also fail to see why he's ok with going in the red with a subscription model but not in the free to play to pay his own developers.

Part of me is afraid Square and Yoshida are falling into the same trap they did when FF14 first launched. Yoshida admitted bravado was to blame.

"One of the biggest reason FF14 failed, was that we didn't understand the Western MMO market and how it had changed," he said. "We had the mentality that 'We are the best. We are Square Enix. We know what players want.' We had so much success with Final Fantasy 11, but we didn't study what had changed in the market since then.

"One of things I did when I took over development of FF14:ARR was to make everyone play current MMOs to see what Western players expect and to get back to that global standard," Yoshida said.

He also mentioned how he was fan of the older Final Fantasy RPGs, the deep rich and dark stories. "The current Final Fantasy games feel like they are for kids," he said, oddly criticizing his own company's offerings. "I want to make a Final Fantasy game that's more for our generation, our older fans, and the response from fans so far is that Final Fantasy is back."

Final Fantasy may be back, and by all accounts from Nick Lalone and the WarCry team, A Realm Reborn is an excellently designed MMO. Hopefully the server issues are indeed cleared up next Wednesday, and enough players can get to play it so that the business decisions Square and Yoshida have made prove true.

Otherwise, Yoshi-P may have to continue doing damage control.

Check out more on Final Fantasy 14: A Realm Reborn on WarCry by clicking below!