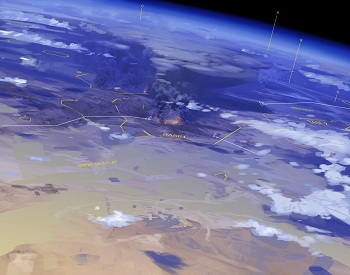 Gearbox is providing financial support and the Homeworld IP to help turn Hardware: Shipbreakers into an official franchise sequel.

You may recall Blackbird Interactive showing off gameplay footage from its title Hardware: Shipbreakers back in May. The game caught the attention of many Homeworld fans, which was no big surprise when you consider that Blackbird itself was created by the founders of Relic, the studio behind the original Homeworld series. Shipbreakers was, in fact, intended to be a spiritual successor to Homeworld, something evident from the released footage.

In a potentially wonderful twist however, Shipbreakers will now be taking on the role of a full-fledged sequel in the actual Homeworld series. This is happening as a result of a deal between IP-holder Gearbox Software and Blackbird that was forged at PAX Dev and revealed at PAX Prime. Hardware: Shipbreakers will henceforth be known as Homeworld: Shipbreakers and Gearbox will be offering support in the game's completion. "These guys have been funded by private equity, but it's clear it was going to take many millions of dollars more," explained Gearbox CEO Randy Pitchford. "We're giving them the brand and the resources to make this happen. Now, these guys are cooking and with the money they have now, they can grow the team."

The agreement was a result, in part, of Blackbird's desire to see the Homeworld live on in a more active way. "We didn't want it to go to a publisher that would let it die," said Aaron Kambeitz, chief creative officer for Blackbird. "We reached out to [Gearbox] and congratulated them on [winning the IP] and that turned into a friendship." With the financial support being offered by Gearbox, Blackbird is currently hiring new staff to help develop and "retcon" Shipbreakers into an official part of the Homeworld franchise. Gearbox itself is keeping busy with promised HD versions of Homeworld and Homeworld 2, in addition to other ongoing projects.