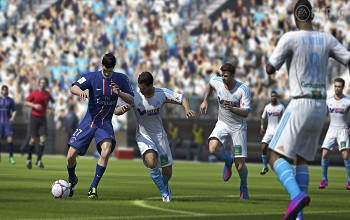 It's mixed message time from the folks at Microsoft.

If you were hoping for a free copy of footie heaven FIFA 14 on your Xbox One, I hope you preordered the Day One edition. Otherwise, forget it, as social marketing manager Graeme Boyd has confirmed that only the Day Ones will be getting it, "while stocks last." The European - not US - Day Ones are getting a free digital copy of the game, as well as a special controller and an exclusive Achievement code, for those of you whose lives are ruled by Achievements.

This information from Boyd comes after a previous, contradictory Tweet that seemed to suggest all Xbox One preorders were getting a digital copy of FIFA 14. That Tweet has since vanished, but when it existed it said "all pre-orders come with FIFA 14 in Europe, Ian. Doesn't matter if it's a Day One console or not.- Xbox (@Xbox)." Phil Harrison, Microsoft corporate VP went so far as to say that "all pre-orders for Xbox One this holiday will include a copy of FIFA 14 at no extra cost." FIFA 14 has a huge following in Europe, and the pre-order announcement was - when it was thought to apply to all Xbox One preorders - seen as an attempt to appease consumers upset with the price disparity between the Xbox One and the PS4.