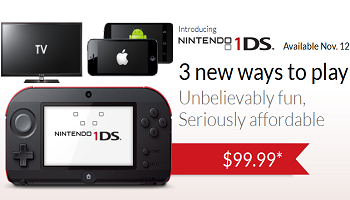 A website has appeared poking fun at Nintendo with the fictional "1DS," a single screen version of the 3DS.

There are some arguably good reasons for the Nintendo 2DS to exist. That being the case, we're going to go ahead and say that "2DS" is still a pretty silly name for a gaming system. We get what Nintendo was going for, but it kind of strikes as the sort of thing that will make gamers roll their eyes and confuse unknowledgeable parents when they venture into the gaming aisle at Wal-Mart to buy little Timmy the Nintendo thingy he's been begging for.

Perhaps feeling the same way we do on the subject, one enterprising soul has created a fairly brilliant website spoofing Nintendo and the 2DS. The website, which mimics Nintendo's own official sites and even links to official company pages, is a mock advertisement for the "1DS," a fictional single screen version of the 3DS that would have only one screen and offer "3 new ways to play."

These options would include one screen play, TV play and smartphone play. In the single screen mode, players would "easily" switch between the top and bottom screen content, presumably with a button push. The TV and smartphone play on the other hand would connect the imaginary handheld to a compatible mobile device which would then serve as a second screen. The Nintendo 1DS would play "all packaged and downloadable games designed for Nintendo 3DS in 2D" and retail for $99.

Again, we have to give some serious kudos to whoever did this. A clear amount of considerable work went into making this looking as authentic as possible. We wouldn't be surprised, in fact, if this actually managed to trick a few people. That being said, we can't help but wonder what you think of the 1DS. Would you consider buying this if it were real, or is it just for laughs?