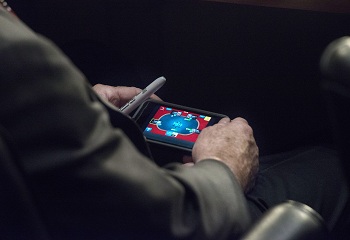 Senator John McCain was caught playing virtual poker during a hearing about potential US involvement in the Syrian civil war.

When you really think about it, multitasking is one of the most useful skills a person can invest in. After all, we're only on this planet for a finite amount of time and it makes sense to do as much as we can with the time we have. Even so, there are still occasions when some focused attention is warranted. Talking on the phone during a movie for instance, is pretty bad form. Nor would we suggest reading a book during a funeral. We can also say with some confidence that if you're a Senator and former presidential candidate, you should probably be paying attention during a Senate hearing discussing whether or not to attack another country.

That last bit was apparently too much to ask to of Senator John McCain who, during a three hour Senate hearing on potential American involvement in the Syrian civil war, was caught by reporters playing poker on his iPhone. After discovering that pictures of his mobile gaming had been published online by the Washington Post, McCain replied with a somewhat sarcastic Tweet. "Scandal," he said. "Caught playing iPhone game at 3+ hour Senate hearing- worst of all I lost!"

Now granted, McCain is already a supporter of American intervention in Syria so he probably figured it was no big deal to catch up on his virtual poker. Then again, the man's job is pretty much just to attend hearings and make decisions based off of what happens during them. You'd think he could maybe put his all into this, especially considering how well unilateral American military actions have turned out in the past.

MovieBob - Intermission: Captain America 3 Is About What?! MovieBob 52 Comments