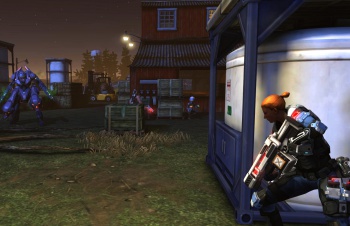 "If we were to do it," says Firaxis' Garth De Angelis, "We'd want to do it right." Modding XCOM: Enemy Unknown is something would-be Sectoid leaders can only dream of at the moment, and Firaxis isn't about to add mod support any time soon. Adding the proper level of support takes time, something Firaxis has a finite supply of; there are other projects that come first.

It doesn't help that the map editor isn't as easy to use as 'add thing here'; there are all kinds of steps that need to be taken to make a map playable, which complicates the modding process. "It's not as simple as Unreal Editor," senior designer Anand Gupta points out. There's a lot of core data that needs to be taken into account, and while Firaxis is trying to make minor adjustments easier to make by shifting that data into places where it's easily accessible, it's not the same thing as a fully equipped mod kit. It's inching closer, and there's every possibility Firaxis might create that kit later; but for now, minor adjustments are the only ones dedicated players will be able to make.

Or, as De Angelis puts it, "I wouldn't say it's on the table currently but we never want to say never." Speaking as someone who's never had the patience to get into modding, but is fascinated by the idea, the thought of being able to put together blasted cities and alien crash sites for humans to investigate is mouth watering. Tweaks will do for now, but it'd be great to see mods on that table sooner rather than never.

XCOM: Enemy Within is due November 15th.