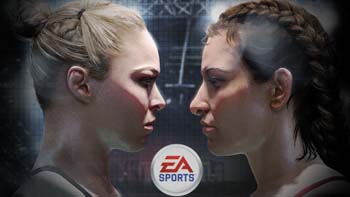 This move forward signals representation of women in both videogames and mixed martial arts.

EA announced today that women competing in the Ultimate Fighter Championship would be featured prominently in their new EA Sports UFC game to be released next year. UFC Women's Bantamweight champion Ronda Rousey and top contender Miesha Tate are the first two women to be featured in a UFC game.

"This is a great moment for videogames and for Mixed Martial Arts," Dean Richards, general manager for EA Sports UFC, said in a press release. "In our commitment to delivering the most realistic fighting experience ever achieved, we wanted to represent the full spectrum of talent and diversity of all the fighters in the sport, including women who have become an undeniable force to be reckoned with."

UFC President Dana White said the women's bantamweight division was added this year. "The female division has become a huge part of the UFC and fans will now be able to experience fighting with them in the game."

Rousey and Tate will also be the first female coaches for the next season of The Ultimate Fighter, a reality television series and mixed martial arts competition. There is no word on how many women will be on the roster for the game, but Rousey and Tate will not be the only ones. EA Sports UFC will be released for the Xbox One and PlayStation 4 in spring 2014.