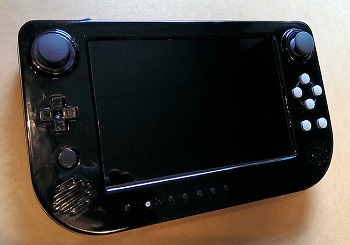 The Cross Plane Wireless Video Interface would allow players to remotely play the PS3, Xbox 360, Ouya, PC and, eventually, the Xbox One and PS4.

Arguably one of the niftiest features the PlayStation 4 will boast when it launches is its ability to be remotely played by the Vita. Granted, the PSP could do this with the PS3 and the Wii U also has off-screen functionality. That said, the PSP version wasn't all that good and the Vita's iteration of remote play will be a tad more portable than the Wii U GamePad. That being the case, what if you had a device that could do remote play with more than just one console? Enter the Cross Plane Wireless Video Interface.

The Cross Plane, a product of Advanced Gaming Innovations LLC, would give players the ability to remotely play consoles including the Xbox 360, PS3, Ouya, PCs, and eventually the Xbox One and PS4. Essentially a wireless, high-definition display with buttons built into, players would be able to connect it to the gaming system of their choice. Players interested in multi-platform gaming could switch between gaming machines with swappable "control paks" that would serve as the "brain" of the system.

Hoping to improve on the Cross Plane's current prototype and begin production, AGI, which is headed up by veteran console modder Chris Downing, recently launched a Kickstarter with the hopes of raising $350,000. It's a considerable amount, but one that Downing and company believe to be justified. "We are aware that our Goal of $350,000 seems lofty, but there is a reason behind the number," the company said on its Kickstarter page. "The components of this system (screens, HDMI), the injection molding of the casings on the first run and the R&D still needed is very...very expensive." The $350,000 should fund the production of 1000 initial units. The Cross Plane, in turn, will have a price tag of $350. Its makers admit the price is steep, but claim it to be necessary to avoid making "a crap product." Gamers interested in the Cross Plane can pre-order one with a $349 Kickstarter contribution.