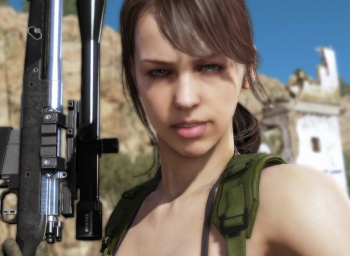 When Hideo Kojima said he wanted Metal Gear Solid 5 characters to be more erotic, he actually meant more sexy, according to a clarification Kojima made at a Los Angeles Q&A. Sexy, to Kojima, is something nebulous, that je ne sais quoi that comes with torn tights on a battlefield. "Sexy could be for guys, weapons, vehicles, it's really that characteristic," he said. Characters won't be talking much in Metal Gear Solid 5, so it's important to Kojima that they show who they are and what they're about in other ways. Even the weapons and vehicles are going to be "sexy," claims Kojima.

He was speaking at a round table with model Stefanie Joosten, who's to portray mute sniper Quiet in-game. "Of course, I was surprised to see Quiet's outfit at first," says Joosten. "I don't think I'm allowed to say a lot about this, but, well, Mr. Kojima has his reasons for deciding why Quiet [is] wearing what she's wearing. Players will just have to look forward to that."

Meanwhile over at 343i, makers of Halo, one designer decided to make his disapproval of the latest character designs known. "[Quiet's] character design is disgusting," David Ellis Tweeted. "Our industry should be better than this." He went on to say that it was "full of man babies" and that, while sexuality had a purpose in gaming - he cites Bayonetta as an example of sexuality used well - in his view the MGS 5 designs were lazy and exploitative.

The original Kojima comment that sparked this off was aimed at cosplayers. It will be interesting to see what cosplayers actually make of Quiet; no doubt we'll find out soon enough.