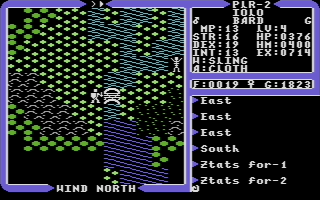 Elite Systems has ported the Commodore 64 version of Ultima IV to iOS.

Ultima IV: Quest of the Avatar easily stands among the most interesting role-playing games ever made. The brainchild of nerd extraordinaire Richard "Lord British" Garriott, it dropped players into the unified lands of Britannia and set them on an epic quest of personal enlightenment. Rather than going up against some big bad, you were instead tasked with transforming yourself into the Avatar, an exemplar of spiritual and moral strength that people could look up to. It's widely accepted as one of the genre's classic entries and now, if you have an iOS device you have a new opportunity to try the game for free.

This chance comes courtesy of Elite Systems, a UK-based developer which recently launched a free port of the game (Commodore 64 version) on iOS. Far from being an act of pure philanthropy however, this free game includes advertisements in its main menu for Ultima Forever, Mythic Entertainment and Electronic Art's recent iOS addition to the long running franchise. Honestly, if that's the price we have to pay for a mobile edition of this title, we'll take it. Of course, if you'd rather play the game on PC, GOG also sports a free edition complete with some extra goodies including maps and hint books that you'll probably want. Ultima IV is a classic, but it's also kind of hard.