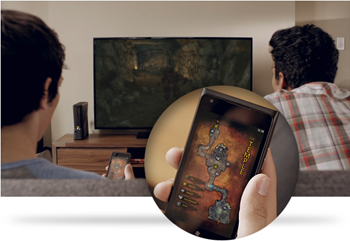 Xbox One SmartGlass plans to "mature" from Xbox 360.

Microsoft plans to make a new and improved second screen experience for the Xbox One, improving from the Xbox 360 SmartGlass. SmartGlass is a free downloadable app on smartphones, laptops, and tablets to as an add-on to the Xbox One. It will be available this holiday season for Windows 8, Windows Phone 8, iOS, and Android devices.

Ron Pessner, Xbox Live General Manager, said in the announcement, "SmartGlass is maturing with the evolution of Xbox 360 to Xbox One. Xbox One was designed from the ground up with SmartGlass in mind." The SmartGlass recognizes and connects with the Xbox One in about four seconds, about three and a half times faster than SmartGlass on the Xbox 360.

In addition, 16 SmartGlass devices can connect to the Xbox One. "An interesting implementation of this would be playing poker with friends or maybe an MMORPG where there can be lots of hands in the pot," Pessner said. "We're excited to see where developers take this and the new gaming experiences they'll create by tying together more devices than before."

Dead Rising 3 already has SmartGlass as a companion. In the game, the app turns a phone with the app into an extension of the game world by becoming an in-game phone.

Pessner is excited to see how developers will use SmartGlass with Xbox one games. "We're seeing scenarios where SmartGlass can be used for methods of game control...but it has to be the right fit for the right game to use SmartGlass as a dedicated controller."