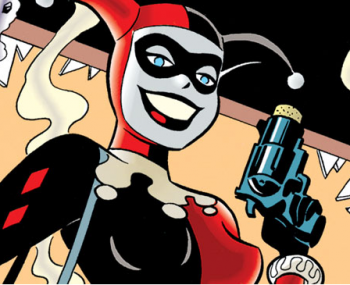 "Her expression is one of 'oh well, guess that's it for me,'" says DC.

DC Comics is looking for a new artist to join the team, when Jimmy Palmiotti and Amanda Conner take over Harley Quinn in November, and a contest has opened up to choose a fan to draw one page of Harley Quinn 0. The artist must draw four panels, and in each one Harley's trying to off herself. Maybe the lighting will fry her, maybe the alligators will wake up and smell the chicken bikini, maybe the whale will chow down. Or perhaps that fourth panel will be the one that finally sees her off, the one where she's sitting naked in a bathtub with a bunch of electrical appliances dangling overhead. She's holding a release cord that will see them plunge into the water. "Her expression is one of 'oh well, guess that's it for me' and she has resigned herself to the moment that is going to happen," according to DC's description.

"I'm a sequential art student, and I find it a bit appalling that the requirement for panel 4 is essentially drawing a female character committing suicide naked," said one commenter, Seairra Willett, in response to DC's announcement. "The sexualisation of suicide is something I will not be putting effort into for a talent search," she added. Many agreed. "This has to be the most repulsive thing DC Comics has done in a while," said Rae Grimm. Others pointed out that the week of September 10th is National Suicide Prevention Week, but the main thrust of the response was that a strong female character was being reduced to a sexualized nothing, and put in a situation that is, at best, unpleasant.

Contest collaborator Jimmy Palmiotti allegedly claimed that the comic was intended to be "Chuck Jones loony toons humor style" but, if so, this requirement - or artistic suggestion, whichever it may have been - isn't given in the contest description, nor is Harley's "statement asking why the writers thinks she wants to [kill herself]" that Palmiotti also allegedly refers to. If anything, the expressions given in the panel descriptions seem at odds with a comic style. "She is looking at us like she cannot believe what she is doing. Beside herself. Not happy," in panel 1 with the lightning bolts, and "rolling her eyes like once again, she cannot believe where she has found herself," in panel 2 with the alligators. Only in panel 3 is she shown having fun. You could make that a Daffy Duck scenario - the 1940s animators didn't shy away from offensive material or suicide jokes - but there's nothing in the contest description to make it clear that this is what the entrants should be going for.

Issue 0 is intended as an audition piece for the artists, not just the contest winner, according to DC's Dan DiDio. Speaking at a DC Comics meet earlier this year he said that "Harley is going to audition eighteen different artists to draw the first issue," with each artist getting one page to show what they can do. Harley will be critiquing each herself.