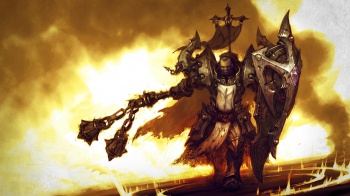 Diablo III's new game director shuts down PC gamer hopes that the console version removing the Auction House and Always-Online may make its way to PC.

Diablo III's two most controversial features: the Auction House and the Always-Online requirement, are here to stay, says Diablo III's new game director Josh Mosqueira, who took over from Jay Wilson early this year. He does, however, admit the faults of both systems, and stresses that the team has taken massive strides to eliminate the necessity of the Auction House with Loot 2.0, and improve the game's online features to make Always-Online feel like a feature instead of a shackle.

"The Auction House is a very complicated conversation..." Mosqueria tells Eurogamer. Complicated indeed - the absolutely broken itemization of the game at launch, compared to the unprecedented amount of players, meant that items you wanted rarely dropped, and were about a million times easier to just buy from someone else, be it with gold or money.

Nonetheless, Mosqureia stresses that "trading is a very important part of Diablo" and he couldn't be more right. In Diablo II, fans built entire economies around items like Stones of Jordans and Zod Runes, so the Auction house was an obvious solution to un-complicate the entire trading process. "It was really important for us to provide a safe environment in which [players] could trade items."

So basically, the Auction House isn't going anywhere, and because of that, Always-Online isn't going to budge either. Mosqureia stresses that these two features go hand-in-hand, and their removal from the console version made for a very different beast:

"Not a lot of people connect their consoles to the internet, that's where the whole idea of having to get four people on the same couch playing together. That's how we get that social aspect. But on PC, we really want players to feel they're part of the bigger Blizzard and Diablo community."

He also assures us that Loot 2.0 is the Auction House solution that PC gamers are looking for: