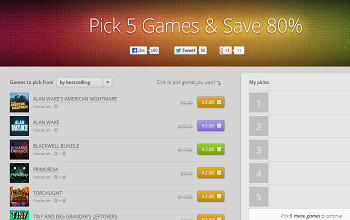 Players can get up to 80 percent off of five eligible games in GOG's High 5 sale.

GOG is turning five and, as the online retailer is wont to do, it's celebrating by offering its customers some fairly decent deals on its wares with its new High 5 sale. Until the afternoon of September 16th, interested gamers can visit the website and pick five games from an eligible library of 25 titles and purchase them together at a whopping 80 percent discount. The games included in the deal aren't throwaways either. They include the likes of Alan Wake, Torchlight, Strike Suit Zero and Amnesia: The Dark Descent, among others.

Alongside the High 5 sale, GOG is also planning a series of special promos, gifts and releases (both retro and new) to help make its fifth anniversary just as special for gamers as it is for the site itself. To get gamers started down that discount trailer, the site is slashing the price of System Shock 2 by 75 percent for the next 24 hours.

With the release of the adventure classic I Have No Mouth and I Must Scream already making September a particularly good month for GOG's frequent shoppers, the High 5 promo is arguably the icing on top of an increasingly sweet cake. We'll be watching with great interest to see where GOG drives its discount train over the next few weeks and will be available to let you know if there any particularly spicy deals to partake in. In the mean time, peruse the contents of the High 5 sale and let us know what you think. Are there any games you plan to snatch up, or are the pickings slim from where you're sitting?