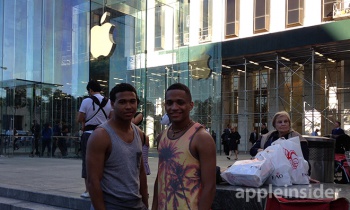 Apple is set to announce a new version of the iPhone this week, but some eager fans are already waiting in line.

How big of an Apple fan are you? I'm guessing not as big as the four people who have been camping out for "the new iPhone" in front of Apple's iconic 5th Avenue store in New York since Friday, despite the fact that Apple hasn't actually announced a new iPhone. It looks like our consumerist society has reached a new low (or high?): people camping out for products that don't currently exist.

Apple will be giving a press conference later this week, in which it is widely expected to reveal the new "iPhone 5S," alongside the cheaper "iPhone 5C." Rumors suggest that the new phone may go on sale on September 20, almost two weeks from now. When first-in-line die-hards Joe and Brian were asked what they would do if the September 20 release date was true, they simply shrugged and said "we'll wait."

The other two line-waiters, Justin and John of Cincinnati's SellYourMac.com, appear to be there on some kind of promotional assignment, but are nonetheless still excited for Apple's unannounced new phone. The four line-waiters are equipped with knapsacks, tents, and supplies enough to last a few weeks. They are clearly serious about their iPhones.

All I could think about when I read this is that one Futurama episode with the "EyePhone," where Fry's famous "Shut up and take my money" line originated. These four fans are so desperate to give Apple their money, they are waiting for a product that Apple have yet to confirm even exists. I'm all for midnight launches, and being excited over being first in line for a new product, but can we all agree that this is getting just a tad out of hand?