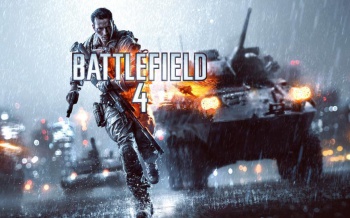 Battlefield 4 will run on the seven-year-old 8800 GT: the graphics card that just keeps on giving.

DICE has revealed the minimum and recommended system requirements for its upcoming spunk-gargle-wee-wee shooter: Battlefield 4, and the good news is you won't need a computer from the future to run it. DICE are well-known for optimizing their games to run reasonably on older systems, and Battlefield 4 is no exception - you'll be able to run it on the seven-year-old Nvidia 8800 GT: the graphics card that just doesn't know how to say die.

Here are the game's minimum system requirements, which include the legendary 8800:

Of course, if you want the game to look as silky smooth as the videos DICE has been showing off, you'll probably want a system a bit closer to the recommended system requirements:

So as you can see, the minimum specs are quite modest, and even the recommended specs shouldn't cost you too much more than a next-gen console.

Will your PC be ready to run BF4 when it comes out this October, or is it time to hit the shop for an upgrade?