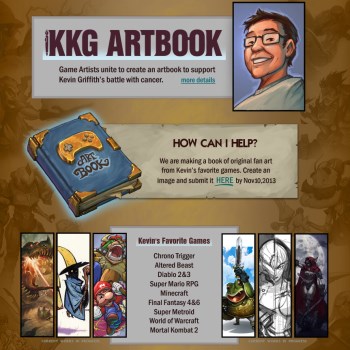 Gamers For Good is seeking submissions for a videogame art book that will raise money to support a Blizzard artist who is suffering from a rare form of cancer.

Kevin Kanai Griffith is an artist on the Diablo 3 team who was diagnosed in February 2012 with Alveolar Soft Part Sarcoma, "an incredibly rare cancer with no cure and no clear treatment path." What treatments are available are grueling and also very expensive, and so to help defray the costs Gamers For Good are putting together a book of original fan art based on his favorite games, the proceeds from which will go to support his fight against the disease.

Anyone can contribute to the cause. Just whip up your best original effort based on Chrono Trigger, Altered Beast, Diablo 2 or 3, Super Mario RPG, Minecraft, Final Fantasy 4 or 6, Super Metroid, World of Warcraft or Mortal Kombat 2, and then submit it to Gamers For Good by November 10. All submissions will be considered donations to the cause, so don't give up anything you plan on making money with later.

The site doesn't say how many images will be included in the book but there are already more than 100 artists on the job, so don't be too disappointed if you don't get in. On the other hand, it's a pretty great cause, so if you've got the talent and an urge to do some good with it, there's no reason not to jump aboard. Full details can be found at gamersforgood.com, and for those who prefer such things there's also a Facebook page.